On the Food Network, he talks about the specialties of Sicily. And it expects a news that we will see in September

These days on Food Network the new episodes of “Giusina in the kitchen – Seacily edition”which for the second year was shot in the country of origin of the Queen of the Stoves, Giusina Battaglia. When we call her to talk about it, we discover that she is in Sicily, but not in the kitchen … 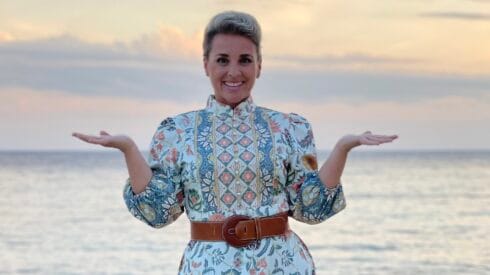 Giusina, are you preparing any surprises?
“I went into the other kitchens. I am working on a new program that I wrote and conceived: “See you at the bar – Tastes of Sicily in a challenge”, produced by Castadiva and broadcast at the end of September also on the Food Network. There will be five episodes where we will challenge typical products made by two bars, places of the heart, one chosen by me and the other by the actor Paolo Briguglia ».

Bar in the sense of …?
«A place where jobs, alliances, loves, friendships are born. There is no “hit and run” like in Milan so to speak. Here, going to the bar is an important moment of the day, where you eat breakfast and meet people. The rotisserie is the protagonist. It is normal to start the day with a coffee and a fried calzone ».

Can you explain the role of Paolo Briguglia?
«We were looking for an exceptional Palermo who loved food. I saw one of his pieces on TV and thought it would be perfect, but I was sure he wouldn’t accept. Instead, he immediately said yes with enthusiasm: it was the best choice I could have made! He is wonderful, he always has a joke and loves to cook. He agreed because he wanted to be himself and for once not act (although he is about to start shooting “The Lion of Sicily”) ».

So you guys are going to be rival judges?
“No, for the first time the judge will be the people. Each of us chooses a bar but to judge what it offers will be the people who do not know which bar the specialty eats. Instead we enter the workshops where the catering company makes the products ».

Wasn’t it torture in this heat?
“It is very hot there and the air conditioners are not enough to overcome the heat generated by the ovens and fryers. It was a formative experience. There is so much effort behind what you will see ».

For “Giusina in cucina – Seacily edition” she also cooked with temperatures that were not quite cool …
«Yes, but luckily we were outside, at the Lido di Bovo Marina in Montallegro (AG). I had a handkerchief to dab on, I also bought several fans, but I lost them all ».

Why did you choose this beach?
“Years ago I went to this beach with my sister and I fell in love with it. It’s huge, it feels like you’re in Miami. It was August and there were very few of us. So I thought about filming it this edition here. We took the ingredients from symbolic places in Agrigento, such as the Scala dei Turchi and the Valley of the Temples where inside there is a vast expanse of citrus fruits and aromatic herbs brought to life after years. There are centuries-old trees, lemons and oranges, and the temple in the background. A paradise”.

Are fans asking her for more selfies or advice?
“It depends on the moment. If I’m in a hurry, they ask me for pictures and autographs. If there’s more time we chat, they give me recipes and we exchange advice. The truth is that when I’m in Sicily, I can’t take a walk without someone stop me. Even Paolo Briguglia didn’t think I was so famous ».

What are the most popular dishes eaten in Sicily in summer?
«I have seen many people eat ice cream or granita with brioche for lunch. But also salads and frozen watermelon sold by street vendors. During dinner you can enjoy a pizza or fish-based dishes ».

On the other hand, what dishes would a “Doctor” Palermo never give up?
«Bread with the spleen, even early in the morning. By the sea, Palermitan brings the baked anelletti, parmigiana and rolls. Food that can be cooked first and eaten later, although I prefer a good salad, like the one I suggest on this page ».

Do you recommend five places to visit with their typical dish?
«Go to Monreale (PA): in addition to being beautiful, there is a bakery, and it is the only one that makes Monreale biscuits of very ancient origin. In “Gattopardo” the Prince of Salina bathed them in coffee. They are shortcrust pastry, in the shape of an “s”, crispy because they are made with lard and covered with a lemon glaze. In Taormina (ME) taste the granita: they invented it in the Messina area and here they make it the best. Choose the most different flavors: almond, chocolate, mulberry. In Trapani try “rianata”, from “reno”, oregano: it’s a great pizza made with tomato, anchovies, cacio horse, garlic, parsley and lots of oregano. Finally, if you go to Catania, enjoy the Catania cartocciate, a kind of calzone cooked in the oven and filled with tomato, ham, olives and mozzarella ».

Can you still find surprises in your region?
«We have nine provinces, within which there are many cities and villages, and each rejects each recipe in its own way. A constant discovery ».

We use cookies on our website to give you the most relevant experience by remembering your preferences and repeat visits. By clicking “Accept All”, you consent to the use of ALL the cookies. However, you may visit "Cookie Settings" to provide a controlled consent.
Cookie SettingsAccept All
Manage consent

This website uses cookies to improve your experience while you navigate through the website. Out of these, the cookies that are categorized as necessary are stored on your browser as they are essential for the working of basic functionalities of the website. We also use third-party cookies that help us analyze and understand how you use this website. These cookies will be stored in your browser only with your consent. You also have the option to opt-out of these cookies. But opting out of some of these cookies may affect your browsing experience.
Necessary Always Enabled
Necessary cookies are absolutely essential for the website to function properly. These cookies ensure basic functionalities and security features of the website, anonymously.
Functional
Functional cookies help to perform certain functionalities like sharing the content of the website on social media platforms, collect feedbacks, and other third-party features.
Performance
Performance cookies are used to understand and analyze the key performance indexes of the website which helps in delivering a better user experience for the visitors.
Analytics
Analytical cookies are used to understand how visitors interact with the website. These cookies help provide information on metrics the number of visitors, bounce rate, traffic source, etc.
Advertisement
Advertisement cookies are used to provide visitors with relevant ads and marketing campaigns. These cookies track visitors across websites and collect information to provide customized ads.
Others
Other uncategorized cookies are those that are being analyzed and have not been classified into a category as yet.
SAVE & ACCEPT